MY ART IN THE CATHEDRAL

Lund’s Cathedral asked me to create a permanent piece portraying Saint Lawrence, the cathedral’s patron saint. My work tells a story in three scenes which was installed just before Pope Francis visited Lund in October 2016. According to legends Saint Lawrence suffered a martyr's death in Rome the 10 August AD 258. Saint Lawrence was responsible for the material goods of the Church and the distribution of alms to the poor. He was told by the prefect of Rome to give the goods to the emperor. Saint Lawrence refused and gave it to the poor and sick people of Rome instead. He brought the people to the prefect and told him that they were the Church's real treasure. For doing this he was sentenced to death and placed on a gridiron. After a while Lawrence is said to have cheerfully declared: “I am well done. Turn me over!” From this derives his patronage of cooks, chefs, and comedians. Saint Lawarence is also called the first deacon. 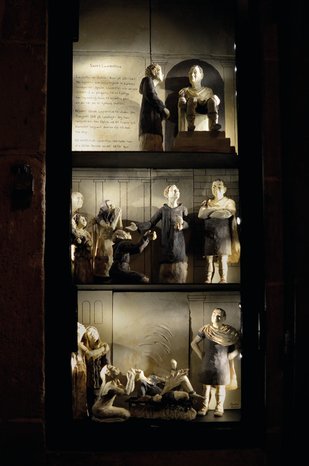